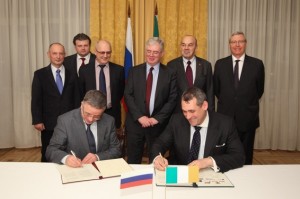 17 November, 2011 :: Formal Plans that will use Elfordstown Earthstation’s 32m Antenna in a Space Debris detection programme, and that will see Irish third level institutions work with the prestigious Moscow Institute of Physics and Technology (Fiztekh) across a range of Space and Physics related programs, were signed at the 8th Russian-Irish Joint Economic Commission, held in Moscow last week.

Rory Fitzpatrick, CEO National Space Centre, said “This is a great opportunity not just for our company, but for our educational institutions and for Ireland as a whole. It represents real progress in an expanding Irish sector, and working with Fiztekh will both enhance skills and attract graduates to this high-end developing space sector.”