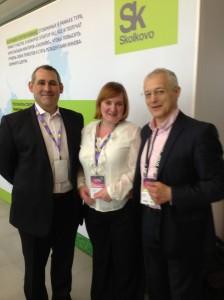 28 May 2013: Cork based space services provider, National Space Centre Ltd, has become the first Irish company to secure project funding and approval from Russia’s Skolkovo Foundation. The project which will focus on improving forestry efficiency, was announced at the official opening of the Skolkovo Village in Moscow yesterday (27 May), following approval by Skolkovo Foundation President, Russian oil and aluminium oligarch, Victor Vekselberg.

The Skolkovo Foundation is an organisation set up and funded by the Russian Government to develop a ‘Silicon Valley’ style science and technology cluster in the Moscow area.

The Skolkovo approved project will integrate existing technologies to provide a new analytical platform for the purposes of optimising forestry management in the vast Russian forest areas. The project will enable a reduction of waste logging, and will monitoring and reduce illegal cutting of trees.

National Space Centre will provide uplink and downlink communications services to and from satellites in space, as well as analysis of data received and has partnered with 5 other companies to deliver the project. The consortium includes the Moscow institute of Physics and Technology (Fiztek), Russian companies ENIKS, Vimpel, Vector and Irish Company Treemetrics.

Work on the project will start in Summer of 2013, and is expected to run over the course of 2-3 years initially.

Speaking at the official opening of the Skolkovo Village in Moscow, where the project was announced, Mr Fitzpatrick, CEO National Space Centre said “Russia is a key emerging market for Irish Companies in this sector. We are delighted to bring the expertise of fellow Irish company Treemetrics on board for the project. This project is the culmination of 2 years hard work in developing contacts in Russia, with Enterprise Ireland’s Moscow Office and Ireland Russia Joint Economic Comission (JEC) trade missions playing a key role in helping deliver this exciting opportunity.” The Skolkovo Village opening event was attended by the Russian Prime Minister Dmitry Medvedev.