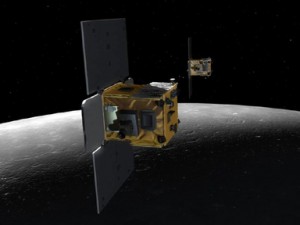 US Space Agency NASA are preparing to crash land their twin spacecraft which has been orbiting the moon since 1 January 2012. The probes Ebb and Flow have been flying in formation around the moon providing scientists with research information surrounding the moon’s composition and internal structure. Ebb and Flow were Gravity Recovery and Interior Laboratory (GRAIL) mission probes which were purposely sent to the moon due to their low orbit and low fuel levels.

The estimated time for their descent is 10.28pm GMT (5.28pm EST, 2.28pm PST) today with an expected controlled landing into a mountain near the moon’s North Pole.

GRAIL project manager David Lehman of NASA’s Jet Propulsion Laboratory inPasadena, California has stated that such a landing is a precedent requiring careful planning for its execution.

“Such a unique end-of-mission scenario requires extensive and detailed mission planning and navigation,” said Lehman. “We’ve had our share of challenges during this mission and always come through in flying colors, but nobody I know around here has ever flown into a moon mountain before. It’ll be a first for us, that’s for sure.”

NASA has announced that the first probe to reach the moon, Ebb, will be the first to go down followed by Flow around 20 seconds later with both probes impacting the surface at 3,760 mph (1.7 kilometers per second).