How to recognise the ISS overhead 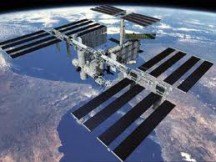 The International Space Station orbits the earth approximately every 90 minutes. Travelling at 17,239.2mph, it moves too fast to be viewed by telescopes, but can be seen by the naked eye or best using a good set of binoculars.

The ISS can be recognised by it’s brightness, appearing to the naked eye like a bright fast-moving star as it reflects the suns light with a solid glow in the pre-dawn or post-dusk sky. If it passes overhead in the daytime, or in full darkness with no captured sunlight to reflect, it won’t be visible.

The ISS moves at about the same apparent speed as an airplane through the sky against a backdrop of real stars.

The ISS is usually visible about once a month from most locations, for a duration of a few days, with each visibility lasting around 5 minutes.

To see when a pass is next visible in your location, using information provided by the Johnson Space Center go to:
Ireland
All Countries

The ISS is an international project operated by Europe, the United States, Russia, Japan and Canada.