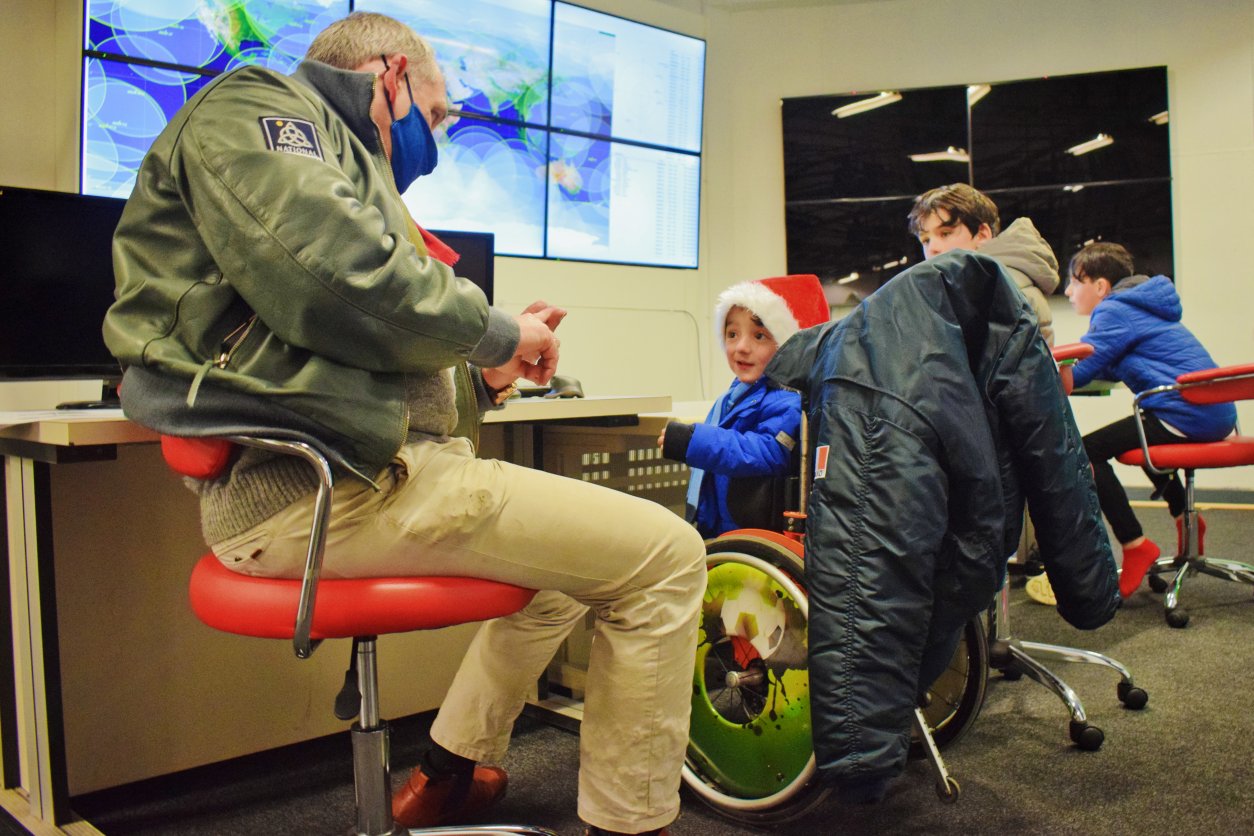 14 DECEMBER — Adam King, the six-year-old space nut who stole the show on this year’s Late Late Toy Show, was last night given an exclusive tour of the National Space Centre (NSC) while filming on site for RTE. Adam, who lives near Killeagh in Cork, travelled to Elfordstown Earthstation near Midleton to record a Christmas message against the backdrop of the NSC’s Big Dish. Wearing his Late Late Christmas jumper and a Santa hat, Adam taped his segment with the spectacularly illuminated 32-meter radio astronomy dish behind him.

With his dad David King and his brothers Danny (13) and Robert (8), Adam was given special access to the NSC and a guided tour by CEO Rory FitzPatrick. The tour included the Ops Centre housed in the distinctive round room below the dish, where the family learned about some of the NCS’s maritime observation, space communications and extra-terrestrial audio tracking. The boys also got to have hands-on fun with some of the space memorabilia housed at the NSC, including a test flight helmet from the Russian space agency Roscosmos.

“Right now, Danny wants to be an astronaut and Adam wants to be a CapCom, the astronaut on Earth who communicates with the crew members in their spacecraft,” explained FitzPatrick. “It was a great opportunity to talk about how satellites and ground stations like Elfordstown facilitate extra-terrestrial communication, and the different kinds of space industry careers Ireland offers.”

The tour also included plenty of space swag for all three brothers, with flight jackets, hats and the same space ice cream enjoyed by astronauts. They also took home circuit boards saved from a 2003 upgrade to the Big Dish. Danny, who’s obsession with the cosmos fosters Adam’s enthusiasm, turned 13 on the day of the visit. In honour of the occasion, he received a special piece of memorabilia: a custom plectrum from his guitar-playing space hero, Commander Chris Hadfield, who served as commander of the International Space Station from 2012 to 2013.

See Adam and the Big Dish on The Cork Nativity airing on RTE One, Christmas Eve at 8 PM.