To Infinity And Beyond, Top Russian Research Cosmonaut Visits Elfordstown 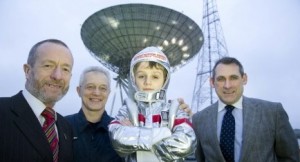 February 11, 2012 :: Top Russian research cosmonaut and scientist Sergey Zhukov visited Elfordstown, where he gave a talk about the future for LIFE IN SPACE and the challenges it presents to humans, to invited guests including MEP Sean Kelly and representatives from the Russian Embassy and Enterprise Ireland Moscow.

Mr Zhukov, currently Executive Director of the Space Technologies and Communications Cluster at Skolkovo, Moscow, is a Russian research cosmonaut and scientist who supervised experimental set ups and instructed cosmonauts aboard the Mir Space Station, and also worked for Energia Rocket and Space Corporation.

Mr Zhukov visited Ireland to view the facility operated by National Space Centre and progress plans signed by Ireland and Russia at the 8th Russian Irish Joint Economic Commission (Nov 2011) to work together across a range of Space and Physics related programs.

Rory Fitzpatrick, Chief Executive of National Space Centre, welcomed Mr Zhukov and thanked him for his offer of assistance in stimulating growth in the space industry in Ireland, and looks forward to working with Skolkovo.

Skolkovo is an organisation based outside Moscow, established specifically to create a high tech Silicon Valley type cluster in Moscow. Skolkovo is set up and part-funded by the Russian Government ‘to create and maintain globally conditions and environment for advanced research and development and subsequent commercialisation of their results’.

Skolkovo’s visit to Ireland was included as part of a global tour.